Xadia is the land comprising the eastern part of the continent. It is a land rich in magic. Everything in Xadia bears a connection to one of the six Primal Sources, every creature, plant, tree, even the earth itself.[1] The most intelligent of the magical creatures, the elves and the dragons, rule over the harmonious races of Xadia.[2] Each elven race has their own territory inside Xadia.

5000 years ago, Xadia was formed by the first elves, followed by the rise of the city of Elarion 3000 years later. The first King of the Dragons, Sol Regem, took on his role 1200 years to the present, succeeded by Luna Tenebris only 200 years later, the same era the Mage Wars took place.[3]

Originally, Xadia was still one land that encompassed the entire continent. Elves were neither allied nor divided by their Primal Sources. Humans suffered during this time,[4] however, this changed with the rise of Elarion 2000 years ago, when they had discovered and used dark magic, which harnessed the magic from magical creatures themselves, killing them in the process. On the decision of Sol Regem, the city of Elarion was burned down in return for Ziard's refusal to give up the forbidden knowledge.[5] Terrified by the threat of dark magic, the elves and the dragons drove all of the humans to the western half of the continent 1000 years ago, which became known as "Judgement of the Half-Moon", due to being an order of Luna Tenebris, the new Queen of the Dragons, who decided to spare the lives of the humans.[4] The continent was then divided by a churning river of molten lava to keep the Human Kingdoms and the lands of Xadia apart from one another.[6]

The next King of the Dragons, Avizandum, rose 300 years before the present. During his reign, the Startouch Elf Aaravos was punished and locked away into a magic mirror through a collaboration of Archdragons and elves for currently unknown reasons.

Approximately 10 years before the present, a group of humans invaded Xadian territory on a mission to kill and harvest a Magma Titan, in return punished for their intrusion by Avizandum, who attacked the foes, taking the lives of Annika, Neha, and Sarai in the progress.[7] Although wishing for peace at first, King Harrow of Katolis was convinced by his adviser Viren years after to seek revenge for the loss of his beloved wife Sarai, leading to yet another trip into Xadia, to the Storm Spire, where the nest of the Dragon King lies. Using a weapon enchanted with dark magic, the two humans struck down Avizandum, petrifying him and taking his life. Due to assuming his son might one day seek revenge for his father, the egg of the Dragon Prince was forcefully taken and presumably destroyed.[8]

Four moons after these events, Zubeia, Avizandum's mate and the reigning Queen of the Dragons, ordered the assassination of King Harrow and his son Prince Ezran, executed by trained Moonshadow Elves. They, however, failed to kill the young prince. One of these elves, Rayla, discovered the lost egg of the Dragon Prince alongside the two princes Callum and Ezran, swearing to return it to its mother, as it could promise peace for the nations at last.[9]

While the group was on their journey to return the egg, the clash at the Border intensified, as the Standing Battalion of Katolis defended the Breach against a troop of Sunfire Elves. However, the humans failed in protecting their only fortress within Xadian territory.[10] Seeing no other way but to block the elves' path into the Human Kingdoms, the Breach was eventually destroyed by General Amaya.[5]

Meanwhile, Viren, who had become allied with the infamous Startouch Elf Aaravos, strove to put everything in motion for a final and fatal attack on Xadia, hoping for humanity to emerge as the victor once and for all. As the temporary ruler of Katolis, Viren allied with Prince Kasef of Neolandia, whom he marched into Xadia with, targeting Lux Aurea. There, the allies overran Queen Khessa, who was murdered by Aaravos before he and Viren corrupted the Sunforge, Lux Aurea's nexus, allowing their soldiers to be enchanted with sun magic.[11] The army marched towards the Storm Spire once again, where they faced Team Zym, who had by then successfully hatched Azymondias, the Prince of the Dragons, and returned him to his home. Together with plentiful helpers such as the army of the Sunfire Elves led by Janai, a pack of Fire Dragons led by Pyrrah, the support of Duren, and other friends, Xadia reigned victorious over the foreign threat. Finally, the newly allied humans and elves faced the Dragon Queen Zubeia, who had fallen into a deep slumber due to the sorrow of losing both her mate and her egg. Now finally awakened again, the queen was overjoyed to learn that there may be a future for elves and humans to live in peace again.[12]

Beyond the Midnight Desert stands a needle of solid rock so tall it pierces the clouds. It was there, at the highest point in Xadia, that ancient Archdragons of the Sky carved a palace out of solid stone. From this perch in the sky, the Dragon King and Queen have kept a fearless watch over the magical lands of Xadia.[2] It was also where the Dragonguard was stationed to protect the egg of the Dragon Prince. Due to the Storm Spire's immense height, the air is thinner towards the peak, making it difficult to breathe when ascending it. Only creatures that possess a natural connection with the Sky Primal are able to linger on the Storm Spire without suffering any ill effects. For these reasons, a spell is required for those scaling it to breathe properly, and its instruction can be found the stairs' gate engraved with elven runes saying "Prepare to draw your last breath". It is also the Sky Nexus.[14] The sculptures, frescoes, and decorations in the Storm Spire choreograph the greatest moments in Sky Dragon history.[15] Inside runs a mineral vein made of opal throughout the stone of the Storm Spire.[15]

The plains around the Storm Spire have become known as "Thunderfall", due to the mighty king dying there.[15]

Lux Aurea was the crowning achievement of the Sunfire Elves, a gleaming city of gold that radiated beauty, pride, and military might. At the city's heart laid the Sunforge, a tower that captured the primal magic of the sun itself to infuse weapons with ever-searing heat. It was also the Sun Nexus,[14] before it was corrupted by Aaravos's magic. After the corruption, the Sunforge began to radiate monstrosities, causing the city to fall into ruins and forcing the Sunfire Elves to abandon it.[16]

The Silvergrove is the home of the elusive Moonshadow Elves, hidden underneath a veil, created through a magic spell. Only a Moonshadow Elf can enter it using a special ritual. Inside the Silvergrove lies the lotus pool[15] with enchanted metal lotuses, that show whether an assassin is alive or not. These flowers are enchanted by the craftsman Ethari. There is also a school and some kind of location where Moonberry Surprises are available.

The Drakewood forest is a region in the eastern lands of Xadia west of the Umbertor mountains. No information available yet.[17][15]

The Far Reaches is a region in the southeastern lands of Xadia that is known to host the great migration of Amblers.[18]

The Frozen Sea is located north of Lux Aurea. No information available yet.[17]

By day, the black sands of the Midnight Desert soak up the sun's rays, subjecting travelers to terrible, terrible heat. But the night is worse: when the sun goes down, Soulfang Serpents emerge from below to suck the soul from anyone foolish enough to stray from the safety of the central oasis.[2] 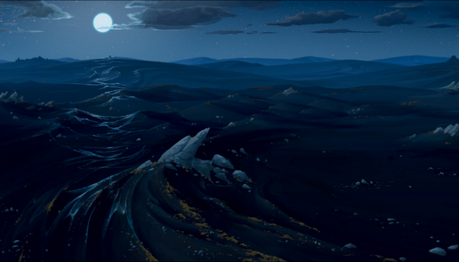 The Moonshadow Forest is a forest located in the western lands of Xadia. It is home to a variety of flora and fauna, with the most notable being the Adoraburr.

The Ruins of Elarion are the remains of the once-thriving human city. Not much is known about it yet.[17]

The Shiverglades are a cold region located in the north of Xadia. Not much is known about it yet.[17]

The Spinning Sea or Gulf of Tenebris is located south of the Moonstone Path. No information available yet.[17]

The Umbertor is a series of snowy mountains located on the far east of Xadia. No information available yet.[17][15]

Retrieved from "https://dragonprince.fandom.com/wiki/Xadia?oldid=32080"
Community content is available under CC-BY-SA unless otherwise noted.