The Human Kingdoms, also known as the Pentarchy, are five great kingdoms founded by humanity following their exile from Xadia.

1000 years prior to the current era, humanity was banished from Xadia by both elves and dragons, for the use of dark magic inside Elarion. The Queen of the Dragons at the time, Luna Tenebris, ultimately ruled to spare the humans after the daughter of an elven leader convinced her to exile them to the west across The Border instead of eradicating them, on a day that would become known as "Judgement of the Half-Moon" inside Xadia. In the west, it is an era known as "The Mage Wars", where humans began settling in the western side of the continent and powerful mages began rising as warlords, battling for resources and land. This went on until The Human Kingdoms began taking shape.[1] Over the centuries, humanity eventually settled into five great kingdoms: Katolis, Neolandia, Evenere, Duren, and Del Bar. Each kingdom has its rulers and customs whilst having enjoyed a long era of peace. The rulers occasionally meet to discuss matters that concern all of humanity.[2]

Katolis is the largest of five Human Kingdoms, both in size and military might. Located Southwest of Duren and South of Del Bar, the kingdom acts Sentinel for the Human Kingdoms with watchtowers along the Breach to be vigilant for Xadia incursions. Katolis's population and great military strength reflect its status as the largest human kingdom. The magical land of Xadia looms large just over the the long stretch of border to the east. In the face of this constant threat, Katolis has endured heartbreaking loss as well as incredible victories over the ages.[3] Its signature colors are red and gold, and its banner bears the kingdom's seal, the uneven towers of Katolis Castle. According to Harrow, this symbol represents finding strength in differences. Katolis was formerly ruled by King Harrow. However, after his death and the disappearances of Prince Callum and Prince Ezran, Lord Viren became the kingdom's de facto leader. Later, the High Council under Opeli took control of the kingdom from Viren. Katolis is now ruled by King Ezran.

Katolis has the largest and strongest military of the five kingdoms, which had been trained by Queen Sarai and General Amaya. The soldiers of Katolis don gray armor and are seen wielding shields, swords, and spears. As Katolis shares its borders with Xadia, the kingdom has a long history of conflict and war with the magical lands to the east.[2] The military maintains a fortress at The Border which is occupied by the Standing Battalion, one of the best battalions of Katolis's military.

Katolis seems to believe in a version of Lady Justice. It is unknown how much power she holds in Katolian religion, however, her presence is significant enough to appear in Harrow's dream. They also believe in the afterlife, a place where people go when they die. 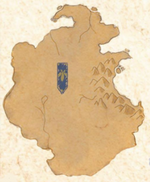 A lush nation considered the garden of the Human Kingdoms, Duren trades their unparalleled harvests with all the other kingdoms. Rainwater and snowmelt flow down from the mountains, bringing water to countless farms in the rolling, fertile plains of Duren. As the breadbasket of the Human Kingdoms, Duren is especially at risk from attack by any vengeful neighbors in Xadia.[3] Duren's signature colors are blue and white, and its symbol is a flower. It is ruled by Queen Aanya following the deaths of Queens Annika and Neha.[2] It suffered seven years of great famine and King Harrow vowed to share Katolis's resources with it, despite Katolis's own shortages of food.[4] It is the only kingdom that aligned with the elves and the forces of King Ezran in the battle against Viren and his army.[5]

Soldiers of Duren don a set of white plate armor, which consists of a cuirass, pauldrons, short tassets, and a black belt. It is worn over a blue tunic with a white hood, in which a blue helmet with a silver circlet is worn underneath, as well as white pants with a pair of gold-accented black boots. While likely not as large and powerful as the Katolian military, Duren's armies appear to be a venerable force in their own right.

Neolandia is a land shaped like an elephant that lies in the harsh, northern desert lands of the Human Kingdoms. A constant struggle to obtain water and food has borne a resourceful yet hierarchical civilization. The towering palace of Neolandia stands as a monument among the barren dunes of the northern desert lands. In the face of great scarcity, the resourceful people of Neolandia have developed a rich culture or trade and barter, while still maintaining a massive, well-trained army.[3] Neolandia's signature colors are white, black, and gold, and its symbol is an elephant. It is ruled by King Ahling, but when he sustained injuries that were inflicted by Viren's resurrected Moonshadow Elf Assassins, his firstborn son Prince Kasef became the acting king until his demise at the Storm Spire.[2] It is unknown who is the acting ruler now.

The garments of Neolandian soldiers are loose black and gold clothing with agals around their heads to tolerate the sweltering and arid desert climate of their homeland.

The kingdom of Del Bar has forged a home among the freezing valleys and crags of the western mountains. Renowned for their skills in hunting and smithing, the people of Del Bar relish a simple and practical life close to nature. To the average person, the freezing valleys and rocky crags of the western mountains would be uninhabitable. But to the hearty folk of Del Bar, there is no better home. Some say they stay warm because hot beef stew runs through their veins instead of blood. Other say that it is just their really thick tunics.[3] Del Bar's signature colors are green and brown, and its symbol is a dragon.[2] It was ruled by King Florian until his assassination.[6] It is unknown who rules over the kingdom now.

Given the wintry conditions of their homeland, soldiers of Del Bar appear to wear dark blue surcoats with fur-lined collars, a studded belt, and a fur-lined brown leather bracer. In comparison to the other kingdoms, this ensemble appears to be the least protective in comparison to the plate armor fielded by the other kingdoms, which is only exacerbated by the absence of helmets within the garb.

Hidden in the convoluted tributaries of the swamplands, Evenere has a reputation as a dreary place. Cut off from the other kingdoms by any avenue other than ships, the people of Evenere live fiercely independent lives. Before Evenere opened its border, few had navigated the maze-like swamplands of the west to encounter its people. Evenere's isolation from the helping hands of neighbors has made it fiercely independent, so much so that the intense bonds between its citizens are often misinterpreted as fear and mistrust of foreigners.[3] Evenere's signature colors are black and green, and its symbol is a dragonfly.[2] It was ruled by Queen Fareeda until her assassination.[6] It is unknown who rules over the kingdom now.

The people of Evenere tend to wear darker colors, usually ones that match with the official colors of their kingdom, like green and black. Their clothes can also be in lighter colors such as gold.

Evenere is presumed to have the smallest military as it is the smallest kingdom. The armor worn by soldiers in battle consists of a small black chest plate with engravings inlaid with gold and attached spaulders. Additionally, it also consists of crimson pants and two pieces of fabric hanging down from the chest plate, as well as a belt with a green stone or gem in the middle. Armbands are also worn, and a helmet covers most of the soldiers' faces leaving room for vision and comes to four points on the top similar to Fareeda's crown.

Berylgarten is located inside Duren. No information is available about it yet.[7]

The Cursed Caldera is a mountain peak located near a village in Katolis. Villagers avoid it due to rumors of the mountain being haunted. In reality, the only threats are illusions cast by the Moonshadow Elf mage Lujanne, which are entirely harmless. These illusions are a necessary step to prevent humans from wandering into the Moon Nexus, which is located near the peak.

Dragontail is located south of Katolis. No information is available about it yet.[7]

Eboreus is located inside Neolandia. No information is available about it yet.[7]

Hinterpeak is located south of Del Bar and is northwest to Katolis. No information is available about it yet.[7]

The Independent Isles are located between Evenere, Del Bar, and Katolis. No information is available about the islands yet.[7]

Mount Kalik is the tallest mountain in Katolis.

The Pawprint Isles are located southeast of Evenere. No information is available about the islands yet.[7]

Serpentongue is located inside Del Bar. No information is available about it yet.[7]

Skall's Hook is located north of Duren. No information is available about it yet.[7]

Weeping Bay is located south of Katolis. No information is available about it yet.[7]

Retrieved from "https://dragonprince.fandom.com/wiki/The_Human_Kingdoms?oldid=31724"
Community content is available under CC-BY-SA unless otherwise noted.