The Art of The Dragon Prince

The Art of The Dragon Prince

ISBN 978-1506717784
The Art of The Dragon Prince is a behind-the-scenes artbook picturing familiar and new content of the series. It is available for purchase as paperback and Kindle file.

The Dragon Prince has enchanted and enthralled viewers since its initial release in September of 2018. Now, for the first time ever, dive into the world behind its creation with this all-new hardcover collection! Never-before-seen concept sketches, preliminary designs, and first impressions from the first three seasons of the animated Netflix series expand over nearly 200 pages of content, from storyboards and environments to the characters and creatures that fans across the world have come to love. Assembled in consultation with The Dragon Prince co-creators Aaron Ehasz and Justin Richmond and executive producer Justin Santistevan, this is the ultimate window into the work behind the show!

The book features a simple introduction reflecting on the progress of the Wonderstorm studio and their connection to Bardel Entertainment, signed by Aaron Ehasz.

This section features two images picturing Viren and his family, accompanied by a story of how he retold the story of dark magic to his children. He introduces them to an Emberback Spider, which he crushes to summon a fireball, in order to emphasize the power magical creatures contain. While Soren recoils, Claudia's first interest in dark magic sparks. Two more images picture Claudia summoning Smoky Seekers and hunting a unicorn for its horn.

This section features five images of concept art that would later turn into Callum, Ezran, and Rayla. The accompanying text explains the thought behind the dynamic trio being a balance of tri-folded strength: head, hand, and heart; mind, body, and spirit. It also highlights weaknesses and strengths that would eventually complement each other when acting as a team.

This section features the creation of Book Two: Sky episode "Fire and Fury".

The first spotlight revolves around the creatures of Xadia, focusing on the animals in the western part of the continent. While all creatures lived in harmony before the continent was split in two, the western side is now home to familiar animals, such as deer, squirrels, and other species found in the earth's northern hemisphere. The creatures closer to the Border are more magical in contrast, as the aim of their designs was to mix fantasy with real-life inspiration. An example given is the Banther.

The second spotlight revolves around Amaya's sign language. Facing the tough challenge of properly representing the Deaf community, Wonderstorm researched info provided by the Deaf and Hard of Hearing communities, as well as other experts. All scenes were created to not lose focus on Amaya while having her words translated. After bringing in new specific words for elves other Xadia-related terms and storyboarding, all ASL content was shown to experts for feedback. Amaya eventually became a fan favorite.

The third spotlight revolves around the Primal Source Moon.

Additional concept art pictures the kingdom of Katolis and its surrounding nature, the magic mirror, Primal Stones, Soulfang Serpents, various items used to further the story or that appear in the background, the Moonshadow Elf Assassins, the Moonshadow form of Moonshadow Elves, early designs of Azymondias's egg, illustrations of spells once cast, an Emberback Spider, Lujanne's illusions, the river monster, dogs, Viren's corruption, as well as several storyboards of the episodes.

Spotlight number one revolves around the Primal Source Sky.

Spotlight number three revolves around the dragons of Xadia. Their concept design aim was to be distinct and diverse, while still reminding of folklore dragons.

Spotlight number four revolves around dark magic and includes a brief retelling of its involvement with human history and Xadia. It elaborates on the ingredients of its use, the effects, as well as the incantations, which are reversed Latin. The incantations are said to have been reversed to maintain the creepy image of dark magic, while also allowing fans to find out the meaning of the spell when sounding them out backward.

The spotlight revolves around the Primal Source Sun.

Additional concept art pictures the city of Lux Aurea and its surroundings, the Silvergrove, the faceless Moonshadow Elves while ghosted, the Midnight Desert and its oasis, Viren's webbed eye, his path through the Breach, and his symbol of shame, Katolis's dungeons, Avizandum's deathbed, the casting process of "Manus. Pluma. Volantus.", the exterior and interior of the Storm Spire, the battlefield surrounding it, a scrapped magic spell, Aaravos's cocoon, as well as several storyboards of the episodes.

Extra illustrations include all credit images of Book One to Book Three, a fully colored map of Xadia, as well as clean versions of Book Three's promotional posters, featuring Sol Regem, Avizandum, and Zubeia.

A new history book page about Aaravos is featured inside the artbook. (See Aaravos Literary Mentions for previous pages) 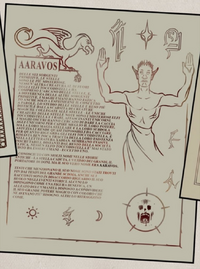 Of all Primal Sources, the stars are the most mysterious. No other creatures except Startouch Elves have understood the Star Arcanum and, unlike other primal sources, human mages have exhausted themselves by just trying to express the concept in words. The study of the stars is made more difficult by the scarcity of magical creatures connected to the stars. The only known creatures connected to the stars are the mysterious Startouch Elves and the rare, fascinating unicorns.

Dark mages have tried to hunt the unicorns to better understand their power, but their stellar magic and their devious cunning make them almost impossible to hunt.

As for Startouch Elves, there is very little trace of their existence in Xadian literature. They seem evasive, inscrutable, distant from the rest of elvish society. No Startouch Elf has ever been seen by humans - except one.

Known by many names in ancient stories - "The Fallen Star", the last of the great ones, the bearer of gifts. But his real name was Aaravos.

Words mentioning his name have been truncated since the time of the great schism, although there are disagreements about his role in historical events. Some describe him as a beneficent figure, an ally of humanity, willing to share his great magical power with those who needed it the most. Other portray him as...[2]