Sunfire Elves are a race of elves native to Xadia. They are connected to the magical energy of the Sun. Their primary home was Lux Aurea and their nexus is the Sunforge. They are the most common of the six elven races.

Sunfire Elves commonly appear with dark skin and hair that comes in varying warm colors, ranging from coal-black to golden blond. Many, but not all Sunfire Elves wear dreadlocks.[1] Their ears are usually long and slim, while their commonly brown horns are thick, long and generally pointed upward. Their face markings are usually colored in yellow or cream tones and often resemble the rays of the sun.

Some Sunfire Elves can enter a "heat-being mode", in which their skin heats, their body glows, their speed and strength are increased, and they become immune to fire. However, this ability is not accessible to all Sunfire Elves.[2] An even smaller number of them can enter a "light-being mode", which allows them to cast healing magic.[3][4]

Sunfire Elves are also famous for crafting Sunforged equipment, which includes Sunforged blades and legendary armor. This rare equipment is forged by skilled craftsmen, created in the Sunforge.

Sunfire Elves revere the Archdragon Sol Regem, repeating the shape of his horns in their crowns, weapon designs, and architecture.[4] Their only known place of residence is Lux Aurea, a grand city that is considered to be a crowning achievement for their race. The city possesses a powerful military, that regularly clashed with human forces at The Border.

Sunfire Elves possess a light of purification within the Sunforge that can both reveal one's true form and purge an individual of any traces of dark magic.[5][6]

While most of the Sunfire Elves thrive to be the golden protector of all of Xadia, the wisest among them remember that the sun, for all its light glory, can blind.

Some Sunfire Elves managed to tame Twin-Tailed Inferno-Tooth Tigers as mounts and pets.

Garments for Sunfire Elves are varied, due to the extremely hierarchical structure of their society. As many of them are warriors and are not a culture that places as great an importance on stealth, they typically favor defensive garments over gear that emphasizes maneuverability. Their clothing tends to come in warm tones of red, brown, gold, bronze, white, and black. Warriors often wear smaller headdresses placed over their horns, while monarchs wear a similar, larger version as crown-like headpiece. These adornments resemble the rising sun between a pair of much larger horns.

Foods among Sunfire Elves are not well known yet, but they are shown to enjoy sweets that incorporate ingredients such as chocolate and marshmallows. This indicates that Sunfire Elves are highly skilled at processing sugars and other plant solids into extremely refined states. Along with this, their desserts are known to be very elaborate, using magic to light them on fire without incinerating them. This presentation is consistent with their culture's propensity for showmanship and grand art.

The Sunfire Elves built Lux Aurea and settled in the city at an unknown point in history. They were allied with the dragons and other elves in deciding to banish all of humanity to the west of the continent. The successful banishment was overlooked by their current leader at the time, whose name remains unknown.[7] Lux Aurea was ruled by Queen Aditi during the reign of Avizandum, and later by her eldest granddaughter Queen Khessa.

Due to humans setting up a fort at the Breach, the Sunfire Elves were involved in a long struggle of two opposing forces in an effort to protect the only entrance to Xadia, which lasted until the humans' leader, General Amaya was captured.[5]

After the city was infiltrated by Aaravos and Viren, and the Sunforge was corrupted in the process,[6] the Sunfire Elves were forced to abandon their main city, as the corrupted Sunforge began to spawn monstrosities that left the city in ruins.[8] Led by Janai, their troops became allied forces of Team Zym during the final battle at the Storm Spire, in which they assisted them by using their Sunforged equipment for both offense and defense.[9] It is unclear if they were relocated elsewhere in Xadia. 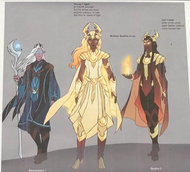 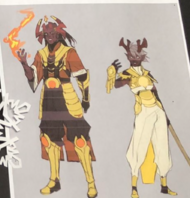 Early Sunfire Elf concept[10]
Add a photo to this gallery

Retrieved from "https://dragonprince.fandom.com/wiki/Sunfire_Elves?oldid=31945"
Community content is available under CC-BY-SA unless otherwise noted.