Startouch Elves are a race of elves native to Xadia. They are connected to the magical energy of the Stars. Their primary home and nexus are currently unknown. They are the rarest of the six elven races.

Startouch Elves are rare, and few others have ever come across them. They can live for more than 5000 years,[1] and they experience "a time scale that is more like the stars than other elves," which gives them a detached, "big picture" perspective of the world.[2] Startouch Elf mages are extremely rare, with only one star mage being born in generations.

Startouch Elves commonly appear with skin that ranges in colors from midnight tones of indigo and blue, to a soft pearl gold, as well as tones of silver. Their hair comes in white to stark black extremes, as varied as starlight. They are usually depicted with horns that are much grander and elaborate than those of other elf races. Clothing worn by Startouch Elves has been shown to include open chest tunics, as well as overlapping, layered robes. All known robe designs incorporate a dark color scheme with accents reminiscent of constellations, planetary orbits, and other celestial phenomena. The only known Startouch Elf, Aaravos, wears an elegant dark blue tunic with golden ornaments, decorated with the symbol of the Star Arcanum. His physical features include dark blue-tinted skin with hair of a light blue hue. He also has yellow eyes.[3]

Startouch Elves are connected the stars, giving them the power of divination, cosmic vision and "seeing into the beyond."

No information available yet.

The only Startouch Elf ever encountered by a human was Aaravos,[4] an Archmage who was born during the era of the First Elves, 5000 years before the birth of Azymondias. Startouch Elves were allied with the dragons and other elves in deciding to banish all of humanity to the west of the continent. The successful banishment was overlooked by Aaravos.[5]

Many disagree on Aaravos's role in historical events.[4] Inside two history books, Aaravos is glorified as the savior and benefactor of the ancient human city of Elarion. He is implied to have contributed to the rise of dark magic within the city, and also saved a few of its inhabitants from Sol Regem's genocide.[6] 300 years ago, during the reign of Avizandum, Aaravos became a "fallen" Startouch Elf, thus becoming known as "The Fallen Star." During this time, he was imprisoned by the new Dragon King in a mysterious realm behind a magic mirror for currently unrevealed reasons.[7] 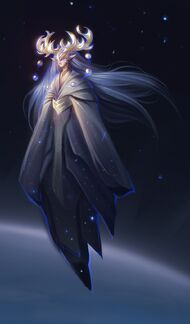 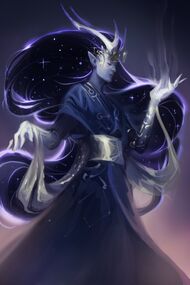 Early concept
Add a photo to this gallery

Retrieved from "https://dragonprince.fandom.com/wiki/Startouch_Elves?oldid=31275"
Community content is available under CC-BY-SA unless otherwise noted.