Skywing Elves are a race of elves native to Xadia. They are connected to the magical energy of the Sky. Their primary home is currently unknown and their nexus is the Storm Spire.

Skywing Elves commonly appear with skin tones include a tan brown, as well as blue or gray, while their hair varies in both color and length, with colors coming in stormy tones of gray and bright shades of electric blue. Compared to other elves, their horn shapes come in several different varieties, such as small and stubby, long and thin, or backward bending horns. Although not always the case, their ears can appear split into a larger and a smaller section. Clothing for Skywing Elves is typically very streamlined and comes in colors reminiscent of the power of a storm, including blues, grays, purples, blacks, silver, and cyan. Their clothing is often very light and is customized according to the needs of the owner, such as going sleeveless as a mage who can conjure wings.

The Skywing Elves fortunate enough to be born with wings have free access to flight from birth on. Some Skywing Elves mages can conjure mage wings by casting "Manus. Pluma. Volantus.", which allows them to fly, though it is not a common ability.[1]

No information available yet.

The Skywing Elves were allied with the dragons and other elves in deciding to banish all of humanity to the west of the continent. However, it is unknown if a leader was present to represent them.[2] 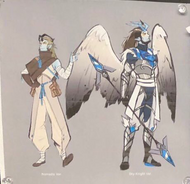 Skywing mages concept[4]
Add a photo to this gallery

Retrieved from "https://dragonprince.fandom.com/wiki/Skywing_Elves?oldid=31729"
Community content is available under CC-BY-SA unless otherwise noted.