The Silvergrove is the home of the Moonshadow Elves, hidden underneath a magical veil and accessed by performing a ritual inside the Moonshadow Forest.[1]

The Silvergrove was built inside Xadia's Moonshadow Forest at an unknown point of history and became the home of the Moonshadow Elves. The Silvergrove's elves and their mounts were present when humanity was banished to the west of the continent and helped to move them along.[2] The Silvergrove was represented by an unknown male elven mage during the reign of Avizandum, who overlooked the fights at The Border with another warrior, next to Queen Aditi and other important elven authorities.[3]

When the Dragon Queen, Zubeia, expected her first and only child, two of the Silvergrove's bravest warriors, Tiadrin and Lain, were chosen as members of the Dragonguard to protect the egg of the Dragon Prince. When they were later assumed to have abandoned their duty, they were ghosted by the rest of the Silvergrove.[1] At this time, Runaan and Ethari took in Rayla and raised her, while training her to become an assassin.

After the death of Avizandum,[4] the Silvergrove assisted Zubeia in an act of vengeance by sending Runaan, Rayla, and four other Moonshadow Elf assassins to slay King Harrow and Prince Ezran.[4] When none of the elves returned, but Rayla was found to still be alive, she was deemed a coward and was ghosted as well.[1]

The Silvergrove is located inside the Moonshadow Forest, east of the Moonstone Path. It exists in perpetual twilight beneath thick forest trees. It features a school and some kind of location where Moonberry Surprises are available.[1]

The Silvergrove's buildings are made of a marble-like material and have round walls and roofs. Paths made out of the same material stretch through the place, and ivy grows on walls and arches.

Members of the Silvergrove follow the honor-driven culture of Moonshadow Elves. They believe in duty and oaths above all else, and never show fear towards anything, even death itself. If an assassin ever hesitates or shows mercy, they will be executed on the spot by their own kind.[5] Those believed to have abandoned their duty are banished from the Silvergrove and become "ghosts", which prevents them from interacting and communicating with any residents. Those who cast the ghosting spell on themselves cannot see or hear ghosts, and they appear faceless to them. Ghosting is a unanimous community decision that has to be discussed by all members of the Silvergrove and is not taken lightly.[6]

The Silvergrove trains assassins from an early age, who represent their home during various missions.

The Silvergrove's form of government was proposed to be an open democracy, in which all Moonshadow Elves got to vote on collective decisions through their respective faction leaders, for example through Runaan, as the leader of the assassins.[8] Whether this information remained an idea or was made canon is currently unclear.

The clothing of the Silvergrove's Moonshadow Elf residents are green, purple, blue, silver, and black in color.

Like all Moonshadow Elves, the inhabitants of the Silvergrove consume a strictly vegetarian diet.[5] They are known for their subsistence on moonberries, as a part of their agricultural resources, finding a use for them in everything, ranging from baked goods to distilling them into alcohols, such as wine.[5] They are especially proud of their "Moonberry Surprise". Members of the Silvergrove also harvest fresh fruit from the Moonshadow Forest in a collaborative effort during harvest seasons.[9]

Ethari's workshop is built into a large tree and is stocked with a variation of deadly metal weapons, which are hung on display on a wall. A large furnace and an anvil are provided for crafts, as well as several materials and chests to store them. Gem accessories hang from the ceiling of the workshop. His workshop was off limits to Rayla when she was young.[10]

The lotus pool[10] lies within the center of the Silvergrove and is a tool to determine whether a loved one out on a mission is still alive. The pool holds metal lotuses crafted by Ethari, which are linked to an assassin's life force and sink to the pool's bottom if they die.[1] 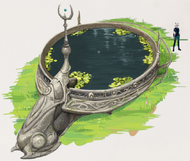 Ethari's workshop
Add a photo to this gallery

Retrieved from "https://dragonprince.fandom.com/wiki/Silvergrove?oldid=30734"
Community content is available under CC-BY-SA unless otherwise noted.