The Dragon Prince Wiki
Register
Don't have an account?
Sign In
Advertisement
in: A to Z, Objects, Xadia,
and 2 more 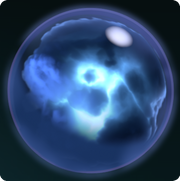 Primal Stones are ancient and powerful magical artifacts that harness the power of a Primal Source.

Primal Stones are powerful artifacts that act as conduits to Primal Sources even when the source itself is not immediately available. They usually hold the raw nature of a captured force within their core[1]and give mage access to primal energy anywhere, anytime - sun magic in darkness, earth magic at sea, and moon magic during the day. They are also the only means by which a human born without a connection to an Arcanum can use primal magic. But Primal Stones are incredibly rare; only master mages can craft them, and the crafting rituals themselves have largely been lost to time.[2]

Moon Primal Stones hold a captured moonbeam on their inside that appears as a silvery light between shadows. They can be used to create illusions, trick someone's mind, reveal the past, and even call across the barrier between life and death.[1]

Sky Primal Stones appear as glass-like spheres that contain thunderstorm or other natural weather phenomena.[1] They can be used to cast a variety of air-based, lightning-based, and ice-based spells, and the storms captured inside can even hatch the egg of a Storm Dragon.[4]

Sun Primal Stones appear as miniature suns, containing variations of fire or the sun's flame within their cores. They can be used to start fires, and produce heat and light. They are said to have been created by Sol Regem in the ancient days.[1]

Earth Primal Stones are natural stones in themselves, often a multifaceted crystal or an orb of petrified wood. They contain the potential of a mighty forest or a towering peak, reflected in dendritic patterns, hairline fractures, and mica crystals. They can be used to terraform someone's surroundings.[1]

Ocean Primal Stones contain whirlpools or large amounts of ocean water in their core. They allow a user to command the tides, redirect rivers, or create floods, as well as giving them the ability to communicate with fish or breath underwater.[1]

There are no known records of Star Primal Stones in the world, though they could potentially bend and warp time and space.[1]

The first Primal Stones were gifted to humanity by the unicorn Leola,[1] who pitied the people of Elarion that were suffering through a merciless famine and received no help from the elves. Together with the knowledge of Ancient Draconic, the language of dragons, and the required runes to draw spells, these new artifacts allowed humanity to thrive.[7]

During modern days, Primal Stones are still used by humans and dark mages. However, the knowledge of how to craft them has largely been lost to time.[2]