The Dragon Prince Wiki
Register
Don't have an account?
Sign In
Advertisement
in: Characters, Male, Female,
and 10 more

This page contains an alphabetical list and basic info of mentionable characters that played a smaller role in the series, which was of enough importance to further the story, but not enough to receive their own respective pages.

Voyage of the Ruthless

Roberto,[1] or simply Berto, is a parrot and the trusty companion of the sailor Villads. He can speak to a limited degree and at one point amused Ezran when he actually said the word "Squawk" out loud, in place of actually squawking. He seems to be well-tuned to Villads's needs, at one point swiftly flying off to retrieve his hat when it blew away in a stiff wind.

Berto possesses a macabre sense of humor. When Callum remarked that a coming storm was his chance, Berto responded "A chance to die", and as Callum tried to ease out saying that he meant a chance to learn, Berto wittily answered "To learn how to drown". This behavior was based on an existing parrot, who is said to be even meaner.[2]

Berto has red feathers with a white underside and blue wings. He also has blue eyes, a dark brown beak, and dark brown talons.

The name "Berto" translates to "noble" and "bright" in German.[3]

Delilah Giehl is an elven explorer who traveled the world with Sir Phineas Kirst.[4] She became the youngest known university professor at the age of twelve.[5]

The character is named after the lead writer Devon Giehl and is the author of the book "Lost Secrets of Xadia".[6] The name "Delilah" translates to "delicate" in Hebrew or Arabic.[7] The surname "Giehl" is a German form of "Giles", which means "young goat" in Greek.[8][9]

The Dagger and the Wolf

Callum and Ezran visited this animal doctor in a small village within the kingdom of Katolis, seeking help from him after Azymondias's egg fell into a lake and began losing its glow. At first, they tried to hide the truth about the egg, but revealed it to the doctor after he proved willing to help them, but only if they were completely honest with him. After examining the egg, the doctor told them that there was nothing he could do to help, but reluctantly told them the story of Ellis and Ava, who had met a healer on the Cursed Caldera.[10]

The doctor is a kind, corpulent man with dark gray hair, a mustache, and a beard. He was seen wearing a brown vest over a white shirt, an apron, black gloves, a tool belt, a red scarf, and a pair of glasses. 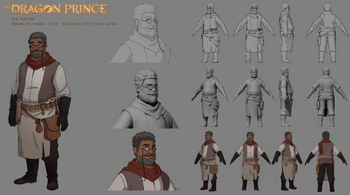 Lissa is Viren's ex-wife and the mother of Soren and Claudia. She resented Viren after he saved their son from certain death by using dark magic and was frightened of him afterward.[11] Lissa eventually decided to return to her family in Del Bar and asked her children on which parent they wanted to stay with. When Soren chose Viren, Lissa told Claudia that she would need to be with her brother.

The name "Lissa" translates to "pledged to God" in Dutch, African, and Arabic.[12]

Mukho is a mysterious mushroom mage.[13]

The name "Mukho" is derived from "Mukhopadhyay", which translates to "principal teacher" in Indian, Bangladeshi, and Sanskrit.[14]

Sabah is a Sunfire Elf soldier who served Lux Aurea in the final battle against Viren. She was named by a fan, similar to Marcos, whom she befriended after the battle.[15]

As a Sunfire Elf, Sabah draws her power from the Sun.

Sabah appears inside Callum's Spellbook as an example of a Sunfire Elf.[16]

"Sabah" translates to "morning" in Arabic and Turkish.[17]

Sir Phineas Kirst, also known as "Sir Phineas Cursed", was a human explorer who lived during the Era of Sol Regem. He traveled the world with a young elven professor named Delilah Giehl, who published a book called "Lost Secrets of Xadia". Phineas is brave and one of the unluckiest humans ever, but unflappably positive and resilient.[18] He owned a pet pigeon that was illustrated as a bird of prey.

Although he was often illustrated as a noble adventurer, Sir Phineas Kirst tended to look rather worn down due to his bad luck, which caused him to often experience injuries. He was a slim man with dark skin and dark, short hair. His attire included blue pants, brown boots, and a purple cape.[19] 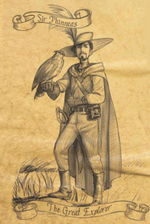 When Callum informs Rayla that a miracle healer lives at the top of the Cursed Caldera, she asks him if it is named after this explorer. However, he corrects her that it is because it is infested with horrible monsters.

The name "Phineas" translates to "the Nubian" in English and Egyptian.[20]

The Sunfire High Priest was a Sunfire Elf and a fixture at Queen Khessa's side. His direct connection to the Sun Primal helped him channel the incalculable power of the Sunforge.[2] He was killed after Aaravos possessed his body.[21]

The Sunfire High Priest's attire consisted of a black shirt underneath a white vest adorned with gold and a red belt. He wore a golden headpiece in front of his horns with white markings below his eyes and running down his chin. Golden greaves protected his legs while golden shoes covered his feet. He also wielded a staff decorated with a Sun Primal Stone that was circled by metal plates resembling rays of sunlight and two auburn ribbons before Aaravos's corruption burned them.

The Sunfire High Priest was a powerful sun mage who could perform sun magic spells without speaking the required incantations.

Terry is an Earthblood Elf that has been announced to be introduced in the series at a later point. He was described as hilarious and possesses similar powers to Toph of the "Avatar" franchise.[22]

As an Earthblood Elf, Terry draws his power from the Earth.

The name "Terry" is a diminutive of "Terence", which is a Latin clan name of uncertain origin.[23]

The Dagger and the Wolf

Tristan[11] is a wielder of a Sunforge dagger and appeared inside the town built at the base of the Cursed Caldera, where he boasted his feats in defending The Border and challenged random bystanders to fight him and his magical weapon. After witnessing him using his dagger to cut Allen's sword into pieces, Rayla caught Tristan in an alleyway, where she asked him to cut off her binding and despite warning attempted the dangerous act, only to result in the promised burn. Tristan then discovered Rayla to be an elf and tried to fight her, but was overwhelmed, resulting in him offering his dagger in return for his life. He was visibly surprised when Rayla refused to hurt him or steal from him. After their initial encounter, Tristan told the townspeople about Rayla and rallied them to find and kill her, chasing her and Team Zym out of the town and stopping upon noticing that they were running towards the Cursed Caldera, certain that they would die there.[10] He later gave Corvus instructions as to where he had seen Team Zym head off to.[24]

Tristan is a lean man with blue eyes, blond hair and mustache. His clothing consists of a white shirt, a gray fur cape, brown gloves, and brown boots.

The name "Tristan" translates to "noise" or "sorrowful" in Celtic.[25]