The Dragon Prince Wiki
Register
Don't have an account?
Sign In
Advertisement
in: World, Locations, A to Z, Human Kingdoms

Katolis is the largest of the five Human Kingdoms, both in size and military might. Its signature colors are red and gold, and its banner bears the kingdom's seal, the uneven towers of Katolis Castle. As Katolis shares its border with Xadia, the kingdom has a long history of conflict and war with the magical lands to the East.[1]

Katolis was formed as one of the five kingdoms following the Mage Wars, after the banishment of humanity to the western continent. 300 years ago, a human orphan became the Queen of Katolis.[2] At a later point, it was involved in further battles at The Border,[3] and would station its soldiers to guard the Breach from attacks of Sunfire Elves.

Nine years ago, King Harrow, a descendant of The Orphan Queen, was crowned as the new king of Katolis following the death of his father. At some point, he was approached by Annika and Neha, the queens of Duren, who expressed their need for aid in fighting a building famine plagueing their kingdom. Following an idea of his adviser, Viren, King Harrow led his armies to The Border, where they intended to harvest the heart of a Magma Titan. However, while on their mission, they were caught by the Dragon King, Avizandum. Viren, Queen Sarai, as well as Annika and Neha, stayed behind to combat the powerful creature, allowing the rest of their people to escape with the titan's heart. During this fight, Katolis would lose Queen Sarai, as the dragon's attacks fatally wounded her.[4]

Nine years after Sarai's death, King Harrow and Viren killed Avizandum using dark magic, and left behind the egg containing his his only heir. Unbeknownst to King Harrow, Viren would steal the egg and hide it away inside a hidden chamber of the castle, leading all of Xadia, and even Viren's allies, to believe that it had been destroyed. In retaliation, the Dragon Queen Zubeia sent elven assassins to kill King Harrow and his son, Prince Ezran. However, Ezran and his half-brother Prince Callum managed to turn one of the assassins, Rayla, over to their side when they showed her the egg, and the three of them left for Xadia in the hopes of returning the egg to its mother. Despite this, the elves had succeeded in killing King Harrow, and Runaan, the leader of the assassins, sent word of their success to Zubeia before being captured.

Katolis barely had a day to mourn before Lord Viren held a funeral for the late king, against the tradition of seven days of mourning, and publicly announced the princes' deaths. However, before he could be crowned Lord Protector, General Amaya returned and announced that the princes were, in fact, alive, thwarting his attempt to seize power. Distrusting Viren's intentions, Amaya demanded find the princes, refusing to stand in as queen regent, and ordering her second-in-command, Commander Gren, to stay behind in Katolis to aid in finding the princes. However, Viren had Gren imprisoned in the castle dungeons as soon as Amaya left, and ordered his son, Soren, to assassinate the princes, believing they would make weak kings.

Viren later attempted to rally the High Council into calling a summit of the Pentarchy against the threat of Xadia as Sunfire Elf soldiers were gathering at The Border, but Opeli reminded him that only a monarch could call a summit, stressing that finding the princes was to remain their top priority. Thus, Viren went behind the High Council's back and used King Harrow's seal to call the summit. When he returned from the unsuccessful summit, Opeli had discovered his treachery and later had him arrested for treason.

Soon after Ezran had returned, he was approached by Prince Kasef of Neolandia, who wished to go to war against Xadia. Despite Opeli's suggestion to have a regent step in for him and take all kingly burdens from him until he would come of age, Ezran decided to honor his father's memory by refusing Kasef's request to ally with him, as he considered peace the wiser path. Unfortunately for Ezran, Prince Kasef would ally with Saleer and Viren, who would force him to give up his crown in exchange for an assured safety of his people. Following this ultimatum, Viren reclaimed the crown and attempted to win Katolis's army for his plans to march towards the Storm Spire, though failed to receive approval from the Katolian citizens. Meanwhile, Opeli, Corvus, Soren, and Barius helped Ezran to escape, then traveled to Duren to seek aid from Queen Aanya.

Katolian forces joined the battle at the Storm Spire, assisting the allied forces in their win over Viren's army. After the battle, Ezran was once again accepted as the king of Katolis.[5]

Katolis is located in the Southeast of the Human Kingdoms and west of the Border. It is directly neighhbored by both Del Bar and Duren. Katolis is known to be heavily forested, with several mountains and a few large lakes and rivers found within the region. The highest mountain of Katolis is Mount Kalik, located in the South of the kingdom, while the longest mountain range is located directly at the border, east of the capital. Ocean points bordering at Katolis include Dragontail, Weeping Bay, and the Independent Isles.

Katolis is home to a diverse population of humans, while elves are rarely seen and seem to avoid humans. Some inhabitants seems to believe in a version of Lady Justice. It is unknown how much power she holds in Katolian religion, however, her presence is significant enough to appear in Harrow's dream. They also believe in the afterlife, a place where people transcend to after dying.

Katolis's form of government is a hereditary monarchy in which a monarch's firstborn inherits the crown, regardless of gender.[6] It was ruled by the Orphan Queen 300 years ago, followed by her descendants, including King Harrow and later Prince Ezran, the current ruler of the kingdom.

When a monarch of Katolis dies, the people mourn for their death for seven sunsets. Afterward, the crown is inherited by their firstborn child, regardless of gender.[6] If the last monarch dies or abdicates while having no biological heir, or if no living relatives are deemed fit or interested in leadership, the Katolian Head Council will select an unrelated orphaned individual as the next monarch, if said orphan is deserving of the role and willing to take on the challenge of ruling.[7] However, it is currently unknown if this law was ever put into use before Viren usurped the throne, as Harrow and Ezran are said to be distant descendants of the Orphan Queen.

For a lot of people in Katolis, winter officially begins on December 3rd, the birthday of the late Queen Sarai, honoring her sweet tooth with celebrations for baked goods and candy. In a fortunate twist of nature, this day is usually greeted by the year's first snow. Although there are many different traditions to celebrate, gathering in the capital is a common nighttime activity, as the main street of the city is traditionally decorated with candles and cedar tree branches. Vendors sell spiced cider from giant cauldrons, paired with pastried filled with pork or strong cheese originating from Duren.[8]

The monarchs of Katolis wear a simple and asymmetrical golden crown.

Katolis grows a variety of its own food and also imports goods from their neighboring nation, Duren. One of Katolis delicacies includes jelly tarts, which are a favorite of the royal family. During winter, people tend to enjoy a cup of hot spiced cider, a seasonal drink mixed from apples and other fruit, as well as holiday spices, usually served with pieces of cinnamon.[8]

Katolis has the largest and strongest military in all of the five Human Kingdoms, which had been trained by Queen Sarai and General Amaya. Councilor Opeli stated her belief that if Katolis went to war with a number of the other Human Kingdoms, Katolis would have a good chance of victory, though at the cost of many soldiers' lives. The soldiers of Katolis don gray armor and are seen wielding shields, swords, and spears. As Katolis shares its borders with Xadia, the kingdom has a long history of conflict and war with the magical lands to the east.[1] The military maintains a fortress at The Border which is occupied by the Standing Battalion, one of the best battalions of Katolis's military. The soldiers within the military are comprised of both men and women.

The Standing Battalion is one of Katolis's most powerful armies, serving under the leadership of General Amaya. The battalion is stationed at an important fortress at the Border and is on constant guard there.

The Crownguard is an elite group of knights that are tasked to protect the King of Katolis and his family. Its ranks took heavy losses when they tried to protect King Harrow from a group of Moonshadow Elf assassins led by Runaan. Although the elves managed to kill King Harrow, the Crownguard knights were able to slay the elves and captured Runaan.

Katolis Castle is home to the royal family, where King Ezran lives and rules with the help of his High Council. Inside the castle are the throne room, a library, the royal chambers, training grounds, as well as a dungeon. The castle itself stands on a rock, surrounded by a large moat and connected to the mainland through a bridge. According to Callum, he used to get lost a lot as a kid after first moving in.[9] 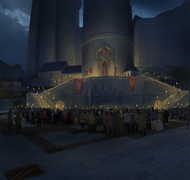 The castle chambers are located inside the dungeons of Katolis Castle and are used by Viren and Claudia to study and cast dark magic. To enter them, a specific combination is required to be pressed on a stone wall, following a pattern of "rock, rock, stone, rock, stone, stone, rock, stone, rock, rock", which will reveal a staircase leading into the room.[10] It is also the place where Runaan and Gren were held captive.

The bakery is located within the town and is owned by the baker Barius, who provides the castle with treats, such as his popular jelly tarts.

The Bather Lodge is a vacation lodge of the royal family of Katolis. It is located deeply inside the Katolian forest. The lodge is named after the Banther, an animal native to the forest surrounding it.

The Cursed Caldera is a mountain peak located near a village. Villagers avoid it, due to rumors of it being haunted and infested with monstrous creatures. In reality, the monsters are merely harmless illusions cast by the Moonshadow Elf mage Lujanne, who uses them to keep humans away from the Moon Nexus, which is located near the peak.

The hidden grotto is located near Mount Kalik and was originally shown to Claudia by her mother, Lissa.[11] It is known to be home to wisps. This grotto proves that the Human Kingdoms are not completely devoid of magic, if you know where to look.[12]

A mountain within the Katolis's borders. According to Claudia, the storm that was contained within her Sky Primal Stone came from the top of Mount Kalik.

The Valley of Graves is where the royalty of Katolis had been buried for generations, but not all of them earned their place in it.[11] 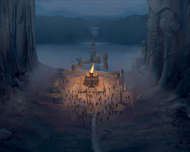 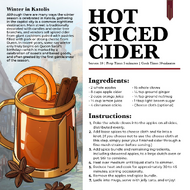