The Dragon Prince Wiki
Register
Don't have an account?
Sign In
Advertisement
in: Characters, Female, A to Z,
and 3 more
English

A Secret and a Spark

Janai is a Sunfire Elf, the younger sister of the late Khessa and her successor as leader of the Sunfire Elves, but she prefers to be known by her military title: The Golden Knight of Lux Aurea. Janai and her squadron had taken up patrol of the Border, where they discovered an unexpected incursion of troops from Katolis.[3] 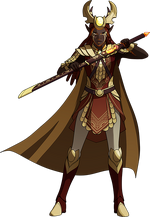 Janai is a tall, dark skinned elf who appears as a young adult. Her dark red hair is pulled back into long strands similar to cornrows. She has dark orange eyes and yellow markings stretch across her face. Like the other Sunfire Elf soldiers, she wears a long red tunic with gold designs and gold armor plating on her shoulders, arms, waist, and legs. Her back is draped with a golden cape and she wears a helmet similar to that of a crown, with a large gold stone at the center, marked with a sun carving. Her straight, dark red horns curve up behind her headgear, each decorated with a gold band near the tip.

Janai is a warrior whose fiery heart truly thrives in the heat of battle, but above all else, she values those who fight with honor.[3] Janai also possesses deep respect and love for her sister Khessa, which was proven when she tried to attack Aaravos out of anger and grief after he disintegrated the latter into ashes.

After the battle at the Storm Spire, Janai began to change her opinion about humans through Amaya, seeing as their races had become allies and were able to enter a new era of peace through shared effort.

As a Sunfire Elf, Janai draws power from the Sun and is at her strongest when the sun is at its highest during noon. She is one of several Sunfire Elves who can enter a "heat-being mode", which causes her body to heat up, her skin to glow along golden lines that crack across her body, her speed and strength to increase, as well as becoming immune to fire.[4][5]

Janai is a very formidable combatant who can easily subdue multiple Katolian soldiers. Her skills seem to be on par with Amaya's, though Janai has the edge when she enters heat-being mode.

Sunforge sword: Janai carries a golden sunforge sword made of molten, steaming metal, capable of cutting through the strongest material. Like other sunforge equipment, the blade is marked by runes.