Servant King (by himself)

Harrow was the King of Katolis, the largest of the five Human Kingdoms, until his death by assassination.[2] He was the husband of the late Queen Sarai, the father of Ezran, the stepfather of Callum, and a descendant of the Orphan Queen. 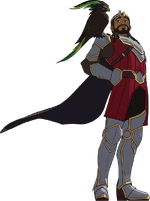 Harrow was a tall man with brown skin, angular features, green eyes, and a goatee. He had dark brown, afro-textured hair that was styled into dreadlocks, with most of the locks tied back in a bun and with golden bands on the ends. During his younger years, his hair was significantly shorter. Additionally, he wore a red and gold patterned tunic, as well as a black cape and silver armor in battle. Since his coronation, he proudly wore the crown of Katolis on his head, which resembles the two uneven towers of the kingdom.

Harrow is referred to as "stubborn" and "hard-headed" by Viren and his daughter Claudia. He had an off-beat and somewhat dark sense of humor, such as when he named his son Ezran's pet Glow Toad "Bait" because the species tends to be used to lure sea creatures by fishermen, and when he jokingly threatened to have Viren executed for waking him up too early.

Harrow described himself as a blindfold in the symbol of Lady Justice, as he considered that justice should be upheld despite one's situation, but he took decisions without seeing the consequences of his actions. Causing them to weigh heavily on his conscience, as he made several immoral decisions in the past, and was easily swayed by Viren's "creative solutions". Harrow's guilt weighed so heavily, that when he discovered that assassins were coming to kill him, he accepted his fate, believing it was partly his fault for listening to Viren's callous ideas and not caring about the morality of others. He was willing to tolerate Viren's use of dark magic earlier in his reign but grew to hate it in his final hours. Finally realizing what damage dark magic brought to his kingdom and humanity, Harrow refused Viren's offer to swap his soul into another body by using a two-headed Soulfang Serpent, which would fool the assassins into believing him to be dead. However, he had no desire to live as a coward and let another person trade their life for his own. Instead, he wished to die as a noble king who faced the consequences for his sins.

Harrow was well aware that there were wrongs on both sides of the war, including the poaching of an innocent Magma Titan that led to the deaths of the queens of Duren and his wife Sarai, the murder of the Dragon King Avizandum, and the supposed execution of the Dragon Prince Azymondias. As he felt regret and guilt for the deaths of the Dragon King and many other innocents, he wrote to his sons to not repeat the same mistakes, wishing for a brighter future for them. The death of Sarai also brought him closer to Pip, his pet Xadian Songbird.

Harrow loved both of his sons dearly, but he ultimately felt tied down by his position, saying that a child has more freedom than a king. In a flashback of Viren, he is also determined to keep his promises of saving both kingdoms by following Viren's plan of killing a Magma Titan to take its heart and perform a warmth spell, even with Sarai's objections of killing an innocent creature for their benefit and starting the war with Xadia, which also costed the lives of many of his soldiers and his wife.

Unlike Viren, Harrow was a good judge of character, as he saw great potential in both his sons. This proved to be right when Callum started to learn magic and wanted to do it "the original way" instead of relying on dark magic, as well as Ezran wanting to move on from the past to choose his own path as the new King of Katolis.

As the King of Katolis, Harrow was a skilled combatant and trained in swordsmanship and his prowess was on par with that of his wife Sarai. He was also an experienced warrior who actively defended himself during the attack of the Moonshadow Elf Assassins. Despite his experience, he was defeated and slain by Runaan, the leader of the elven assassins.

For nine years, Harrow had ruled the kingdom of Katolis with benevolence. He often sought advice from Viren but made the important decisions himself. Instead of sending his men out on a mission alone, he was willing to take the lead and risk his life in battle.[4]

Retrieved from "https://dragonprince.fandom.com/wiki/Harrow?oldid=33629"
Community content is available under CC-BY-SA unless otherwise noted.