Dragons are a race of powerful and intelligent magical beings that inhabit the lands of Xadia. They are divided into six races based on their connection to one of the Primal Sources of magic that exist in nature.

Adult dragons appear as massive, scaled reptiles with horns, four legs, bat-like wings, razor-sharp teeth, slit-shaped pupils, and clawed feet. Hatchlings, or dragonlings, such as Azymondias, appear to be slightly larger than Glow Toads and, like most animal offspring, feature a head and limbs that are proportionally too big compared to the rest of their body.

The dragons of Xadia are oviparous, meaning that they lay eggs instead of giving birth to live young. How often dragons reproduce varies between each elemental race of a dragon. For example, Storm Dragons are known to reproduce only once every 1000 years[1] and their eggs can only hatch inside the eye of a storm.[2]

Dragons live for 500 years on average,[3] while Archdragons such as Avizandum and Sol Regem have lived for over a millennium. 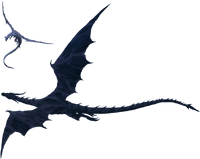 Some dragons are solitary, while others like to live in groups.[5] The language of the dragons is known as Ancient Draconic. They are also capable of learning human and elven speech upon reaching the age of 75.[6]

The most powerful of the dragons are called Archdragons, which are many times larger than ordinary dragons with a lifespan of centuries, yet extremely rare. Like Archmages, Archdragons are masters of their Arcanum and have the deepest possible connection to them, as opposed to regular dragons.[5][7] Some Archdragons are capable of sensing dark magic in humans, but whether this is due to their heightened senses or another reason is currently unknown.[8]

Dragons have ruled the magical lands of Xadia alongside elves for thousands of years, and the latter revere them for their magic and power. One of the greatest of the Archdragons is chosen to be granted the title of King (or Queen) of the Dragons. At some point, the Sky Dragons sculpted a palace of solid stone at the highest peak of the Storm Spire that would act as the official domicile of their monarchs.

At some point before the division of Xadia, the human mage, Ziard, discovered dark magic through the use of the essence within magical creatures and decided to use said magic to help his people. Sol Regem, an Archdragon of the Sun and the reigning King of the Dragons at the time, discovered this and demanded Ziard to surrender practicing dark magic. When Ziard refused, Sol Regem, planned to burn down the human city of Elarion as punishment. Ziard attempted to stop Sol Regem by attacking him with dark magic but was incinerated in turn. Though Ziard managed to scar and blind him with a fireball before he died, the dragon dove into a body of water to extinguish the flames and carried out the destruction of Elarion. Afterward, Sol Regem was later succeeded by Luna Tenebris, an Archdragon of the Moon, during these events. At first, she agreed with the elves that all humans should be annihilated. But after some convincing by a lone elf, she decided to spare and banish humanity to the western parts of Xadia before splitting the continent in half.

300 years before the birth of Azymondias, Avizandum, an Archdragon of the Sky and referred by the humans as "Thunder", succeeded Luna Tenebris as King of the Dragons. He jealously guarded the Border during this reign, from any incursions by the Human Kingdoms into Xadia, even killing Duren queens, Annika and Neha, and the Queen of Katolis, Sarai. Avizandum was eventually killed four moons before the show by dark magic wielded by humans. After Avizandum was slain, the humans ransacked his lair and stole many of his possessions, and destroyed his only egg. In reality, the egg was not destroyed, but secretly stolen by the human mage, Viren, and hidden away in Katolis castle. The elves and dragons believed in Viren‘s deception nonetheless, and Avizandum’s mate, Zubeia, ordered Moonshadow Elf assassins to be sent to Katolis and kill King Harrow and Prince Ezran in revenge.

Upon discovering that the Dragon Prince's egg was alive, Callum, Ezran, and Rayla made it their mission to return the egg to Zubeia. During the trip, the egg had hatched into Azymondias, the future King of the Dragons. Ever since then, the dragons haven't caused much trouble except when Soren picked a fight with Pyrrah the Fire Dragon, which he barely escaped with his life thanks to Zym. Finally making it to the border Rayla and Callum had trouble getting past Sol Regem but thanks to a little creativity they make it past him, rejoined by Ezran the group make it to Zym's home the Spire. But as their trek up the mountain began they found it difficult to breathe but found help from Pyrrah. However, upon making it to the top the group looked in sadness as Zubeia was ill and put herself into a deep sleep over grief-stricken about losing her family, as well as Zym being hesitant about seeing her. But with Viren and his army coming closer the baby dragon tried to wake her up to no avail, the dragons also took part in the battle against Viren along with humans and elves leading to their victory. To the greatest news of all, Zubeia had finally awoken happily to be reunited with her son and have her hope restored.

Sky Dragons have a connection to the magical energy of the Sky. They can control and harness the powers of the wind and the storm, allowing them to perform abilities such as channeling lightning through their bodies or firing them from their mouths. Subspecies of the Sky Dragon are the Storm Dragon and the Cloud Wyvern.[5] It is implied that Storm Dragons are extremely rare because they only lay an egg once every one thousand years, and that the eggs can only hatch in the eyes of storms. Whether said storms have to be created through natural or artificial means, such as Callum destroying the Sky Primal Stone, is currently unclear. Storm Dragons build their nest out of moss and flowers for their eggs.[7]

Sun Dragons have a connection to the magical energy of the Sun. They can harness the powers of the sun, allowing them to breathe streams of fire from their mouths. They are also known for their symbiotic relationship with Sunbirds.[9] A subspecies of the Sun Dragon is the Fire Dragon.[5]

Moon Dragons have a connection to the magical energy of the Moon. More info is yet to be revealed.

Earth Dragons have a connection to the magical energy of the Earth. Not much is known about them, but since Rex Igneous tends to live underground and comes up once every 100 years, it can be assumed that Earth Dragons are primarily subterranean.[10] A subspecies of the Earth Dragon is the Earthen Wyrm.[7]

Ocean Dragons have a connection to the magical energy of the Ocean. More info is yet to be revealed.

Star Dragons have a connection to the magical energy of the Stars. More info is yet to be revealed.

Retrieved from "https://dragonprince.fandom.com/wiki/Dragons?oldid=31504"
Community content is available under CC-BY-SA unless otherwise noted.