The Dragon Prince Wiki
Register
Don't have an account?
Sign In
Advertisement
in: Characters, Male, Elves,
and 4 more

Aaravos is a "fallen" Startouch Elf[2] who was trapped inside an area behind a magic mirror by the Archdragons and elves of Xadia for yet unrevealed reasons. He was one of the first elves to live inside Xadia and the last of the "Great Ones".[5] 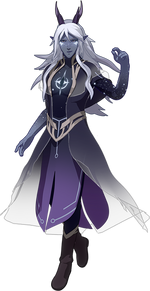 Aaravos is a handsome Startouch Elf with midnight blue skin and long, layered white hair. He has narrow, upturned eyes with black sclera, and his yellow[7] irises can sometimes appear as lilac depending on the lighting. He sometimes wears a dark cloak with a star symbol on its hood. His skin gets darker in color across his torso and down his arms before lightening once more. He has a black star marking on his chest which is surrounded by a white hued marking, as well as star markings of the same hue across his face and hands. These star markings are broken up into two layers of design: diamond patterns just below his eyes and a splash of smaller markings that give him the appearance of being freckled, making him look very young despite being approximately 5000 years old. His eyes sometimes glow white when performing magic.

Originally, parts of his body, his hair, his eyes, his horns, and the star on his chest were illuminated like stars. After becoming a "fallen" Startouch Elf, the lights on his body have faded.[2] These markings, however, still illuminate when using magic.

Aaravos is an exceptionally intelligent, cunning, and manipulative individual. He is both mysterious and secretive, but also charming and charismatic. Even Viren finds himself compelled by Aaravos's cryptic words and gifts and is willing to trust him as an advisor, despite being an extremely sharp-minded individual himself.[8] Aaravos knows when to back down from a fight that can not be won and is very adept at staying several steps ahead of both his allies and enemies. Unlike Viren, Aaravos sees the bigger picture of things and does not fool anyone about his intentions, including himself. In addition to this, he claims to never tell any lies.

Aaravos also has shown a hint of arrogance when he reveals his belief on individuals who cannot be reasoned with, claiming them to be simple animals who deserve to be motivated by fear. Despite this, he has shown a dislike of those he considers arrogant, such as Avizandum, who took part in imprisoning him,[9] and the Sunfire Elves who took Viren - an extremely dangerous individual - and brought him right to the Sunforge, their nexus and source of their power. He is also shown to be at least somewhat sadistic, as he revealed the circumstances of Aditi's death to her granddaughter Khessa before killing her as well.[10]

Aaravos can be playful and enjoys teasing, but is also able to respectfully maintain an interesting discussion involving both thoughts and emotion. Despite generally withholding information, Aaravos has no issues expressing his distaste for his enemies in Xadia, such as Avizandum, whom he holds a grudge against.[9] Given the centuries-long span of his imprisonment, this malice is made all the more impressive due to how long he has maintained his vendetta.

Aaravos is often highly informal in his body language and mannerisms. From resting on the back of his spectral horse in his projection to communicate with Viren to his often circular and airy hand gestures, it appears that Aaravos is a very casual individual when attempting to gain the favor and loyalty of potential allies. Even when committing the act of murder, his body language remains fluid, relaxed, and radiates confidence. So far, it is not yet made clear what his personal goals are or why he chooses to aid Viren.

As a Startouch Elf, Aaravos draws power from the Stars. However, due to being a "fallen" Startouch Elf, he can only access a fraction of his former power.[2]

Aaravos is a phenomenally powerful Archmage who can perform magic of all six Primal Sources, as well as dark magic. It is currently unclear how he acquired these powers. The level of his mastery of magic is proven by the fact that he can perform spells without speaking the required incantations.[11]

Although trapped behind a magic mirror, Aaravos can perform magic that allows him to see what appears on the mirror's other side. He was also able to kill Khessa by flicking a single finger under her chin. He was later able to, through Viren, transform the entire human army into powerful sun monsters immune even to dragon fire, doing so by turning a ritual of the Sunfire Elves against them and stealing their magic.[10]

Aaravos has a familiar that is affiliated with him, a caterpillar-like creature that is not native to the world of Xadia.[12] He cannot directly speak to anyone beyond the mirror, but his magic allows him to control this companion, allowing him to use it to facilitate communication across the mirror. He can perform a magical ritual in concert with a person on the opposite side of the mirror to teleport the caterpillar across its surface, and he can then channel his voice through it so that those on the other side can hear him speak, while he can hear what the caterpillar hears. If Aaravos connects in this way to a person on the other side of the mirror who wields a magic staff, he can cast spells and channel them through it. The caterpillar is capable of increasing in size over time, and Aaravos can perform spells through the form.

When the caterpillar puts its silk across one's eye, they see an apparition of Aaravos to communicate with. This apparition is only visible to that person, and can conjure whatever they desire for themselves (for example, a steed).[9] When the caterpillar bites another, they are transformed into a spectral form of Aaravos for a short time and have all of his powers.[10] Aaravos's familiar can also use dark magic to steal magic from another being and sometimes can control others like how he controlled Viren to drain Azymondias's essence.[13]

Aaravos is a master manipulator. He is able to earn the trust of the cunning yet skeptical Viren after he reveals what the latter desires. He then proceeds to help Viren by instructing him on what to do so that he can achieve his goals of persuading the other monarchs of the Human Kingdoms to wage war on Xadia. Aaravos's persuasive and manipulative nature is further shown when he can trick people in power to further Viren's goals. Additionally, he intentionally calls Claudia an "asset" to which Viren refuses the claim and calls her his daughter and not merely a useful object. Aaravos smiles, as unknowingly Viren has shown him an exploitable weakness.